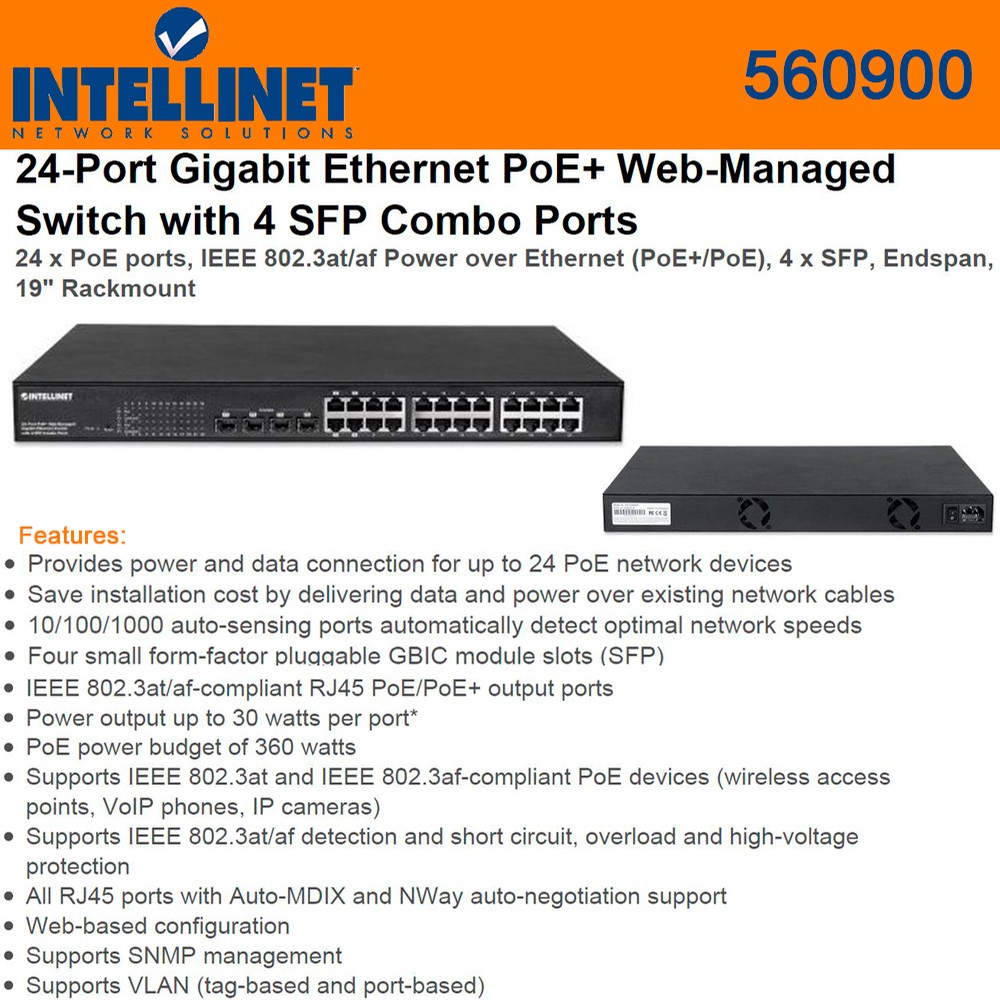 The Intellinet 24-Port Gigabit Ethernet PoE+ Web-Managed Switch with 4 SFP Combo Ports (560900) is designed to pass both data and electrical power to a number of PoE-compatible devices via standard Cat5e or Cat6 network cables. Equipped with 24 Gigabit Ethernet ports, all of which support 802.3at/af Power over Ethernet (PoE/PoE+), this switch can power wireless LAN access points and bridges, VoIP (Voice over Internet Protocol) telephones, IP surveillance cameras and more while delivering network speeds of up to 1000 Mbps.

The Intellinet 24-Port Gigabit Ethernet PoE+ Web-Managed Switch with 4 SFP Combo Ports supports the IEEE 802.3at protocol and is designed to inject up to 30 watts of power per port*. IEEE802.3af- or IEEE802.3at-compliant devices attached to the switch require no additional power, thus eliminating the time and expense of electrical rewiring and minimizing the unsightly clutter caused by power supplies and adapters in awkward places such as ceilings and walls. Any mix of PoE and non-PoE devices is supported, and thanks to its short circuit, overload and high-voltage protection function, your equipment is well-protected. For devices that are not 802.3at/af compliant (legacy wireless access points or network cameras), we suggest the use of an Intellinet PoE/PoE+ Splitter.

This PoE switch is equipped with an impressive array of advanced management functions that allow you to be in full control over your network. The 24-Port Gigabit Ethernet PoE+ Web-Managed Switch with 4 SFP Combo Ports supports VLAN, port aggregation, QoS, port mirroring, SNMP V1 and the popular SNMP V2c, just to name a few.