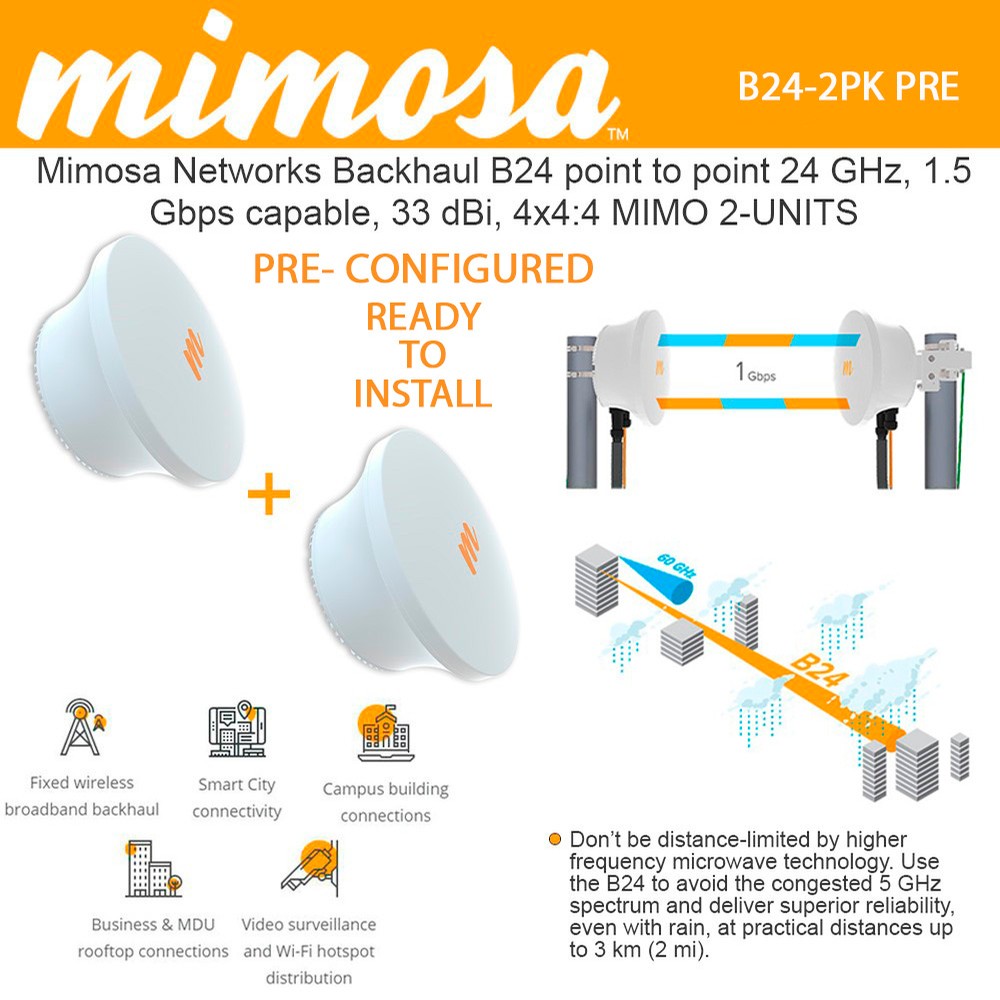 The Mimosa B24 breaks the existing barriers of price, size, performance and power efficiency in the less crowded, unlicensed 24 GHz band.

Delivering nearly a Gigabit of low latency IP traffic in a single direction, the Mimosa B24 is the industry’s price performance leader in unlicensed 24 GHz backhaul. Designed from the ground-up using reliable, high volume components, the B24 achieves incredible performance at a disruptive price that fits the economics of broadband providers and enterprises in suburban and urban markets.

To meet modern internet traffic needs where nearly 90% of the peak evening traffic demand can be in the download direction, the B24 dynamically adapts to changing demands using Auto-TDMA technology. Low-latency Gigabit throughput can be directed either upstream or downstream as needed to maximize spectrum utilization throughout the day. Legacy FDD radios are limited to symmetric traffic usage, leaving vast amounts of spectrum constantly underutilized.

Don’t be distance-limited by higher frequency microwave technology. Use the B24 to avoid the congested 5 GHz spectrum and deliver superior reliability, even with rain, at practical distances up to 3 km (2 mi).

Weighing in at just 2.7 kg (6 lbs), Mimosa’s B24 is incredibly easy to transport and install.

At a fraction of the weight, size, and power of alternative solutions, the B24 is incredibly easy ?to install and its compact design fits discretely into any visually-sensitive area.

Consuming a mere 19.5W, the B24 is great for applications requiring low-cost battery backup.

Like other Mimosa products, GPS synchronization allows collocated B24 radios to share the same channel, permitting up to eight links to operate at the same site, each running at 1.5 Gbps.

For flexibility, redundant Ethernet and fiber connections are supported, a feature that was previously only available in stratospherically priced outdoor products.